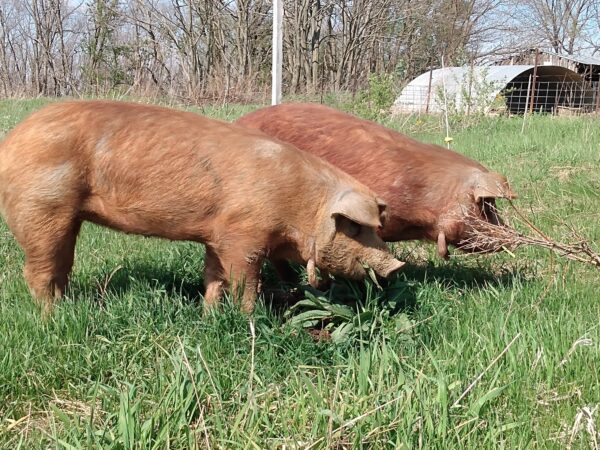 The Red Wattle is a large, red hog with a fleshy wattle attached to each side of the neck. The wattles have no known function. They are a single gene characteristic and usually pass to crossbred offspring. The breed is unique to North America making them especially valuable genetically.

The Red Wattle comes in a variety of shades of red, from light blond red, to a red that is almost black. The color is consistent throughout the animal. Animals with black spots may be registered, as long as the spots only appear on the belly area and are small in size.

Hair can be short and straight or longer and wavy. The head and jowl are clean and lean, the nose is slim with a slight curve, and ears are upright with drooping tips. The body is short coupled and the rump or rear end is slightly arched.

Mature animals weigh 600 to 800 pounds, but may weigh as much as 1,200 pounds. They measure up to four feet high and eight feet long when fully grown. Most breeders now prefer butcher weights around 300 to 325 pounds with hanging weights from 220 to 245 pounds.

Red Wattle hogs are known for hardiness, foraging activity, and rapid growth rate. They produce a well marbled flavorful meat that has been described as similar to beef. The sows are excellent mothers, farrow from 7 to12 piglets, and provide good quantities of milk for their large litters.

Red Wattles adapt to a wide range of climates. Their active foraging makes them a good choice in outdoor or pasture-based swine production. They have a mild temperament and their gentle nature recommends them to the small-scale, independent producer.

The origin and history of the Red Wattle breed is obscure, but red hogs with wattles are known to have been in North America since at least the mid 1800’s. It is believed that these ancestors were introduced through the Gulf of Mexico and spread throughout the country. The modern roots of the Red Wattle hog trace to 20th century descendants of these wattled pigs in Texas.

In the mid-1980s the Livestock Conservancy facilitated a meeting of Red Wattle breeders, encouraging them to unify their efforts to benefit the breed. The breeders preferred to continue with the three registry system. The Conservancy’s 1990 census reported 272 purebred registered offspring. In late 1999, Jerry Russell began to search for Red Wattle hogs and found only 42 breeding animals belonging to six breeders. None of the three registries had registered stock in years.

The Red Wattle Hog Association was founded in 2001 with the support and encouragement of The Livestock Conservancy. Beginning with only 8 members, the breed association continues to grow and support the breed throughout America. Currently there are approximately 100 members with more than 200 purebred hogs registered annually.